Acceleration of Customer Acquisition in a New International Market

For several years, this financial leader had been looking to successfully break into the U.S. market on a much larger scale than the one at which it was operating. First however, the company needed to determine the most impactful approach to improving how quickly they could increase customer satisfaction and solidify brand loyalty. 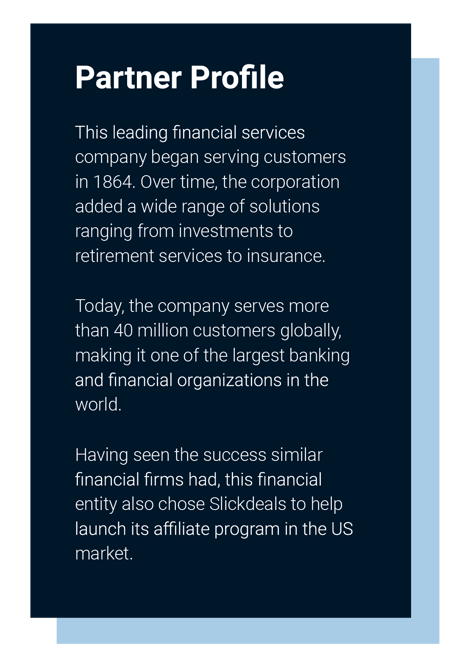 The organization had aggressive deals being offered on several of their anchoring products, but competitors were also providing their customers with similar banking benefits. They called on Slickdeals to find the best approach to increase sales and advance the customer acceptance of their interface and brand equity at scale.
Generate Volume at Scale

With the challenge of increasing conversions for their credit card and savings account offerings in 2018, this renowned financial company’s team came to Slickdeals with set goals and numbers surrounding growth for these products.

In November 2018, the financial leader started a two-month promotional campaign built around their credit card. The campaign was a success. At the end of the promotional period, the team removed the credit card deal from their offerings altogether.

Slickdeals has many qualities that make it unique in its market. In addition to its robust audience, its ability to support a financial cashback offer was crucial to the company’s next campaign. The goal was to increase conversions to the client’s savings accounts.

Initial recommendations modeled the campaign after successful deals with other financial firms. The teams also accounted for some of this partner’s more exclusive traits, like its lack of cash deposit requirements. To build on this, the Slickdeals team and client agreed that a $100 bonus offer with the opening of each account would help them compete well in the market.

Once engagement began, the Slickdeals team was perfectly positioned to fully support the deal through fulfillment, including monitoring performance and providing related customer support.

The campaign progressed for several months, and the Slickdeals team used all available resources to continually evaluate visibility and changes in the market. Across most banks, they found that the Cost Per Account (CPA) was high, but few were also offering cash bonuses like the worldwide financial leader.

The partner regularly discussed potential shifts to accommodate market updates that could further enhance traction. After a slight pause to evaluate progress, they rebooted the campaign with an increased CPA and higher bonus offering of $125. This kept the deal from getting stale and led to even greater success in April and beyond.

Overall, the campaigns lasted for just around a year. The campaign surrounding savings accounts led to the opening of over 7,000 new accounts total. Brand recognition overall increased in the U.S. as well. Major financial news companies even called out the deals as ideal opportunities for consumers.

The global financial firm found the efforts incredibly impactful in reaching their key metrics for bringing on new customers. As a byproduct, the near 156-year-old financial institution experienced more general brand awareness as the savings account deal was lauded by several trusted financial advice firms as a strong option in the market.